My contract time ran out, but most of C-saur's walk is complete, just need to add the minor spots and scale pattern overlay. It's taken 15 hours so far, but in the process I've devised some new tricks(new to me anyway) to help speed up future animations of this size. No examples, I'll put the animation in this weeks video.

Managed to put in a few more effects for YGTS last night. It's just a shadow effect that takes place during power moves, the higher your power meter, the bigger the effect.

I'm going to start working on the first stage tileset today, hopefully have something to show for the weekend.
Posted by Brent Anderson at 1:08 PM No comments:

Email ThisBlogThis!Share to TwitterShare to FacebookShare to Pinterest
Labels: contrasaurus, got, monsta, shaft, strd6, the, you

Posted by Brent Anderson at 2:57 PM No comments:

Email ThisBlogThis!Share to TwitterShare to FacebookShare to Pinterest
Labels: bullcrap, contrasaurus, friday, got, monsta, shaft, strd6, the, you

The design is finalized, but before I throw up the final version, here's a few more steps we went through to get him done.

This style sheet here has the features chosen from the first put together. STRd6 wasn't sure about the skin pattern yet, so I had the go ahead to experiment. I looked up various random predatory animals and threw down their looks on the dino.

Number 1 was picked out fo that bunch and refinements were made, as seen in the next sheet. Note the larger eye, smaller brow, smaller calve muscles, rounded knees, straighter back, and less back pattern. 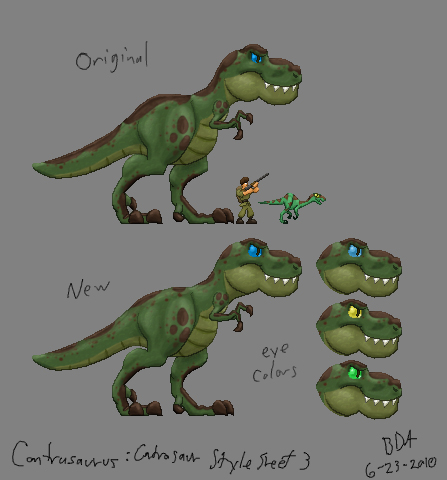 And finally, for my own personal use, a pic of the final design with the basic shapes involved and my process for creating the beast, just to help keep him consistent while animating. 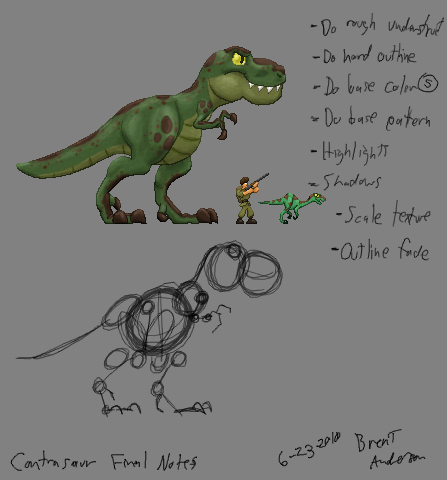 Now, here's some random pics from YGTS. I've got some special effects for when you hit stuff, normal and power. Power punching a row of blocks will transfer the energy to the end block and cause it to move over one square. The same for a power upercut, but to a lesser degree due to gravity. I also fixed the air uppercut to drain power as it hits things, in the same manner that the air faceplant does. Blocks break into pieces now, don't know if that was done for the last post or not.

Had a busy weekend with family, didn't really have the time to work in a video. So it's Monday!

I've done some gameplay tweaks to YGTS, blocks that come down on your head will now deal you damage and break if they pin you, I still have to make the "Ouch my effin noggin'!" animation for it. I've also set up a sample stage 1 to test out the falling block aspect, I need to get an enemy in there to test that out as well.

Since last Wednesday I've gotten a few animation done for Contrasaurus, namely the soldier death and soldier bit in half. It's not that gory, which is a change for me, I would have geysered that stuff, rainbow(all red) even! Today I worked on a style sheet for the Contrasaur himself. It's got 3 different designs with 3 different color patterns and a couple hue swaps. 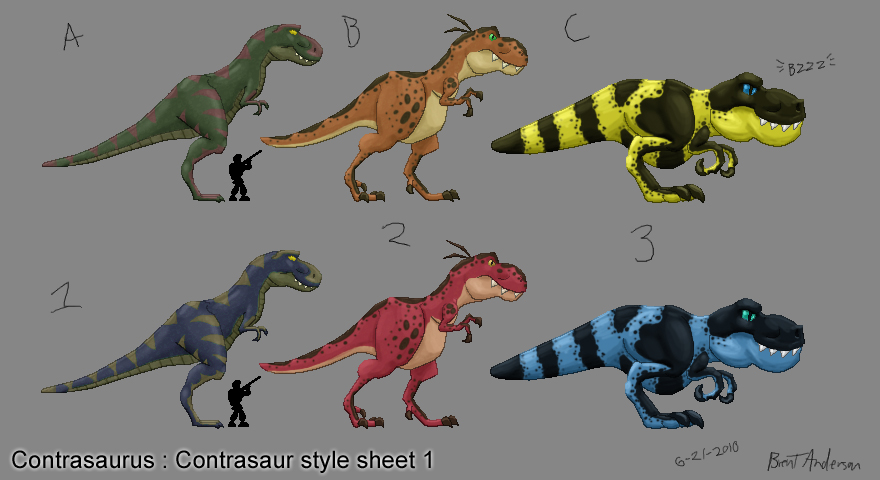 So the client looks it over and tells me what they like from where, and then I make up a new one which should be close to OR the final design. I don't think Tyranobee is a very strong contender, but I may use that myself somewhere down the road.
Posted by Brent Anderson at 8:40 PM 2 comments:

Email ThisBlogThis!Share to TwitterShare to FacebookShare to Pinterest
Labels: character, concept, contrasaurus, friday, got, shaft, strd6, the, you

Worked on some more animations today for Contrasaurus, a soldier upper torso shooting animations. You can see some of my animations in their prototype, which is updated frequently. Just use about any browser but IE and it should work.
http://contrasaurus.strd6.com/
There is a little green running dino in the first scene, and later bullets, dirt effects, blood effects, spark effects, and some running soldiers.

Got some YGTS work done also. Monsta's power downward attack is done, he plants his face rather hard into the ground, these weak ass pics barely convey the awesome.

This here is what it looks like sorta powered up.

So what it does on ground is damage things below you and spread an effect wave that can do things like pop some poor soul off the ground.

Also did some special effects, like dust puffs from running starts and landing from a jump.

You'll see it all in motion come Friday. Also, IDs rage engine is something.
Posted by Brent Anderson at 9:19 PM No comments:

Email ThisBlogThis!Share to TwitterShare to FacebookShare to Pinterest
Labels: contrasaurus, E3, got, monsta, shaft, strd6, the, you

It's Monday, and I ain't got nothin' to show for it.

That's right! Spent today working on Contrasaurus art and watching E3 press conferences. Gawdamned akward things they are, I wish they'd toss out all the flash and "special guests" and just show off the damn games. Oh well, Nintendo better be ready, Microsoft and Sony are looking to take a bite out of their softcore gamer stockpile. Also, Bullet Storm looks like it'll be a blast to play.
Posted by Brent Anderson at 9:52 PM No comments:

Email ThisBlogThis!Share to TwitterShare to FacebookShare to Pinterest
Labels: E3

Posted by Brent Anderson at 11:17 PM No comments:

Email ThisBlogThis!Share to TwitterShare to FacebookShare to Pinterest
Labels: contrasaurus, friday, got, shaft, strd6, the, you

I've been contracted by STRd6 to do artwork for their game Contrasaurus. They'd like me to tell you to check out their story document and a demo mockup of the game in action. The links will be below, you must have a HTML5 Canvas compatible browser, like Firefox, Safari, Chrome or Opera.

I'm enjoying myself with it, the wacked out story hits me the right way, and I love 2d shooters, plus dinosaurs! AND Reagan!

On the flipside, here's some headgear action for our old man Beardy. 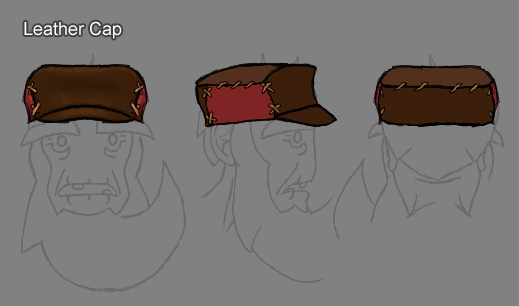 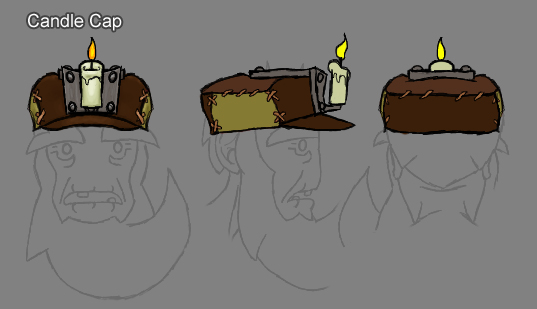 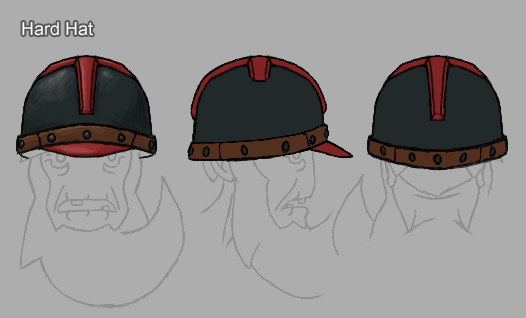 I've also gotten more done with YGTShaft, but I'll leave that for Friday.
Posted by Brent Anderson at 8:51 PM No comments:

Email ThisBlogThis!Share to TwitterShare to FacebookShare to Pinterest
Labels: bad, Beardy, contrasaurus, got, item, miner, mountain, shaft, strd6, the, you

Posted by Brent Anderson at 8:04 PM No comments:

Email ThisBlogThis!Share to TwitterShare to FacebookShare to Pinterest
Labels: bullcrap, friday, got, shaft, the, you

Texturing results and something else.

Texture Teusday yielded 3 textured objects, the Stickaxe, Old Pickaxe, and Fine Pickaxe. Some of the Fine texture was from the Old one, saving some time. Pictures. 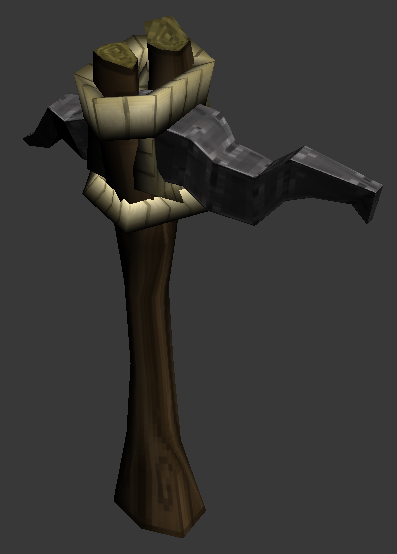 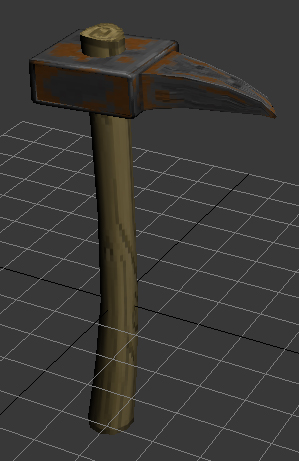 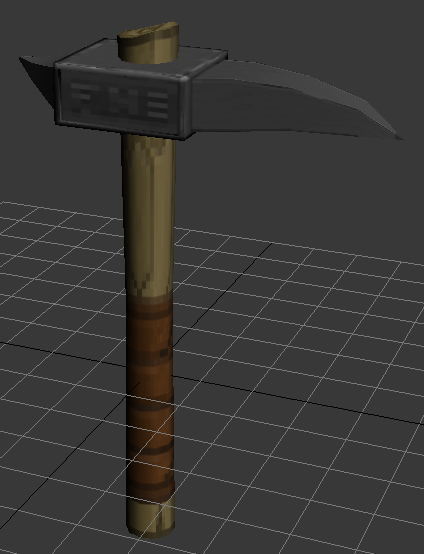 Each of those textures are 64x64. You really only see them from a distance, so no need to sap the memory.

Also, I've been piddling around with a 2D game, a little here, a little there. I'm calling it You Got The Shaft as of now. I've got some animations for the main character done and working. Also his platforming physics are working. More details as they are fleshed out, so heres a pic. It's small, tile based 16x16, more oldschool.

Posted by Brent Anderson at 9:17 PM No comments: