Updated Tutorial, and other stuff.

Stuff was done. Imagine that.

Yessir, that tutorial section of the game now has a Crave segment. New shark wigout sfx now plays during the pre-frenzy freak outs. Some more adjustments to Crave fills made.

Just a few minor things to go over, then a little more testing. Also of note, I really enjoy playing the game now. I mean, I enjoyed it before, but I'd need to take a break. I can zip through it now without blinking. Mostly due to better pacing and controls I imagine.

Lousy update, I know. Hey, how about that Cavs/Raptors game!
Posted by Brent Anderson at 10:24 PM No comments:

Spear Rear, and other non-clever names.

Yeah, just a sound effect and extra testing to do.

The last couple days have seen the addition of power-up rewards, so a lot of number tweaking and code adds. Boooooooorrriinnnngg. Let's talk about the power-ups, or a few of them anyway.

Big Mouth - It doubles the size of your bite hitbox(sphere). You can chew more things this way. 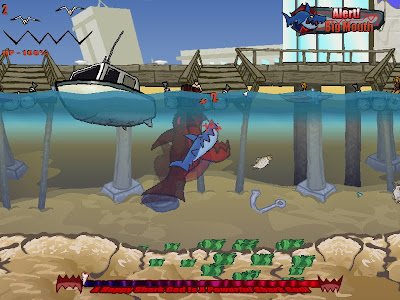 Spear Rear - Every thrash of your tail shoots out spears! Use them to kill many enemies, then eat their corpses. 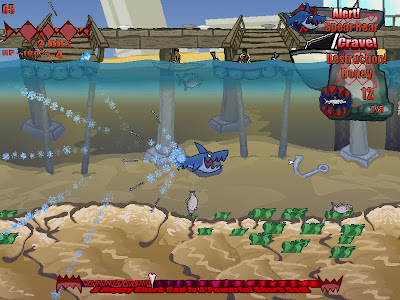 Shocking - Bolts of electricity randomly fly off your body, pretty much splatting anything they hit. 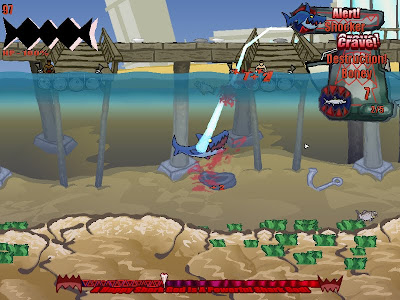 Mouth'splode - Everytime you bite down, explosions fly forth. 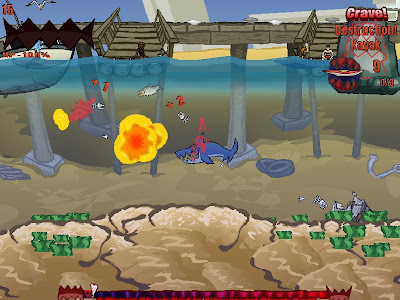 There are others besides these, like Poison or Magnet mouth. Poison just, well, poisons all the enemies. Magnet mouth stuns and slowly draws edibles toward your mouth. These all last for 10 seconds and are random rewards for fullfilling a Pain Crave.
Posted by Brent Anderson at 9:44 PM No comments:

Work on TGWD version 1.1 continues. Today I pretty much got all the Destroyer levels hooked up with the new Crave deal, save one, the Carhtoothus battle. Just a bunch of script work really.

Did some testing on stages 1 through 5 to see if any of the Crave max fill settings needed changed, which they did. Now you only need to down say, 3 sea gulls instead of 5. Destroying larger things like boats require only 1 to set it off now, as often there would only be 1 to 3 boats present, and requiring 5 of them would leave none left to be "doomed", totally wasting the effort(minus extra points).

Craves during the Carhtoothus battle will revolve around you injuring yourself. I'm thinking of adding score multipliers to certain crave actions, as there is risk involved that is not worth 160(or less) points.

I forgot to mention this, the Sharkburn miniboss in stage 4 now throws dynamite after unloading his gun. The number of sticks depends on what difficulty your playing. 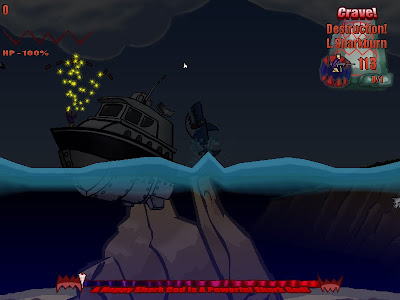 What's left then, that last bit of Crave, a new sound effect for shark wigging out pre frenzy, a couple more power-ups, and of course, testing. I'll try to post again Wednesday night, keeping regular on this stuff is on my to-do list.
Posted by Brent Anderson at 11:15 PM No comments:

I saw my mother tooling around with this here blogger, decided it looked nice and easy, so here I am.

Now, I released version 1 of The Great White Destroyer last month. So far I've gotten a few reviews, which is nice, but I'm still pretty much an unknown. I'll be smacking up reviewers again when version 1.1 is complete, as well as contacting some distribution services. My thanks to the people who gave it a look, Play This Thing, and PC Games and Reviews. Thanks also to The Freelance Astronauts, I heard a name drop during last weekends Red Factioning, totally caught me off guard. I tried piping up in the chat but it moves at 1000 mph. Thanks guys.

Ok, TGWD version 1.1. The controls are much simpler and responsive now. Gone are the finger ravaging speed click, it's simply hold left, right, or both. Also added is a "Crave", basicaly during the stage Carhtoothus will crave a certain act of destruction. You get bonus points for fullfilling these, and a power up/event if you max it out. Example, Carhty wants 5 Croakers destroyed, you have 20 seconds to do it in. You kill one, gain bonus points equal to the time left, the timer increases by 1/4th it's start. You kill off four more, maxing out the crave, your reward, all remaining Croakers become doomed and die in 5 sec, giving you even more points. Visuals? Ok. 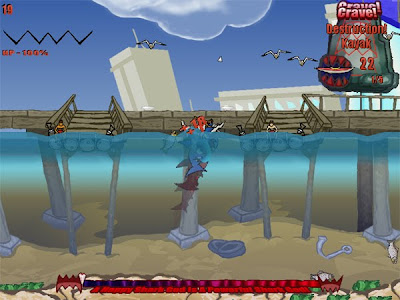 This next shot shows the alert that lets you know what bonus you've gotten. 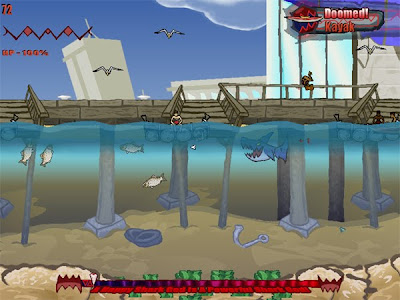 I've got maybe another week of work to wrap this, hopefully most of it will be testing and tweaking. I guess I'll pretty up this blog too, sometime.
Posted by Brent Anderson at 1:40 PM 1 comment: